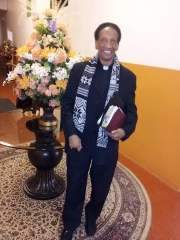 Maurice Wayne Huston 64 of State Street, Entered into the arms of the Lord on January 17, 2021 at Ellis Hospital in Schenectady.He was born in Harlem , NY. on January 7, 1957 the son of the late William  Franklin And Marjorie Huston.

He was employed as a clinical assistant at the Oswald D heck Developmental Center in Niskayuna And was employed by the City Mission of Schenectady.he was ordained as a Minister on September 30, 2000.

Funeral services will be held on Friday, January 29, 2021 at 11 AM in in the Curtis Funeral Home & Cremations Inc. 324 Hulett Street Schenectady, NY 12307. A calling hour will proceed the service beginning at 10:00 a.m. Burial will be in the Historic Vale Cemetery.

Due to the COVID-19 pandemic masks and social distancing will be strictly adhere to.

To order memorial trees or send flowers to the family in memory of Maurice Wayne Huston, please visit our flower store.