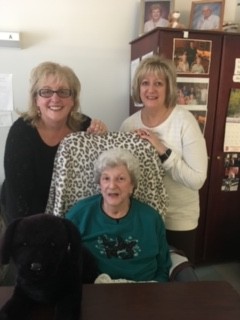 Our Lady Queen of Peace

Born August 16, 1930 in Schenectady, New York the daughter of the late Otto and Jennie Mastrainni DeMania. She was a graduate of the former Mont Pleasant High School.

Laura was employed at General Electric Company in Schenectady for 30 years retiring in 1995.

She was a communicant of Our Lady Queen of Peace Roman Catholic Church. She was also a member of the Rotterdam Senior Citizens Center.

Laura enjoyed music, dancing and was an avid bowler in her younger years.

In addition to her parents she was predeceased by her husband; John R. Clark, he died in 2001, her longtime companion; Pat Frascatore, he died in 2015, two brothers; Carmen and Albert DeMania.

A Mass of Christian Burial to which relatives and friends are invited to attend will be held on Wednesday September 18, 2019 at 10:30 a.m. at Our Lady Queen of Peace Church 210 Princetown Road Rotterdam. Burial will be Private.

The family would like to Thank entire staff at Schuyler Ridge and a special Thank You to the staff on Ensign Point for the loving care they gave Laura.

To order memorial trees or send flowers to the family in memory of Laura A. Maynard, please visit our flower store.
Send a Sympathy Card

Our Lady Queen of Peace